SWR reports on flood prevention in the Ahr Valley

On July 7, 2022, the SWR science magazine odysso broadcast the feature “Nach der Flut ist vor der Flut” (After the flood is before the flood). In it, scientific recommendations for the reconstruction of the affected regions along the Ahr and Erft rivers are highlighted. In the summer of 2021, Virtual City Systems also contributed to the scientific work with data visualizations.

In cooperation with the Magdeburg-based aerial survey company Geofly and the Institute for Qualifying Innovation Research & Consulting (IQIB) in Bad Neuenahr-Ahrweiler, Virtual City Systems was able to contribute to the reappraisal of the devastating flood disaster.

The data, which Geofly had collected immediately after the disaster by means of aerial surveys, were visualized by Virtual City Systems as an interactive 3D map. The visualization of the extent of the destruction is one of the bases for scientific evaluations, which will serve the preventive reconstruction of the region. In combination with other data from the district, a before-and-after comparison is also possible.

The contribution is available in the ARD media center. 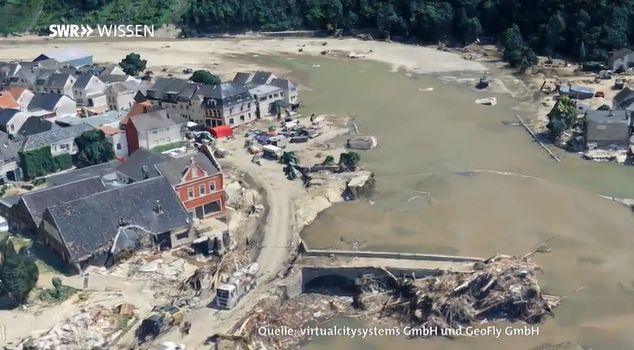